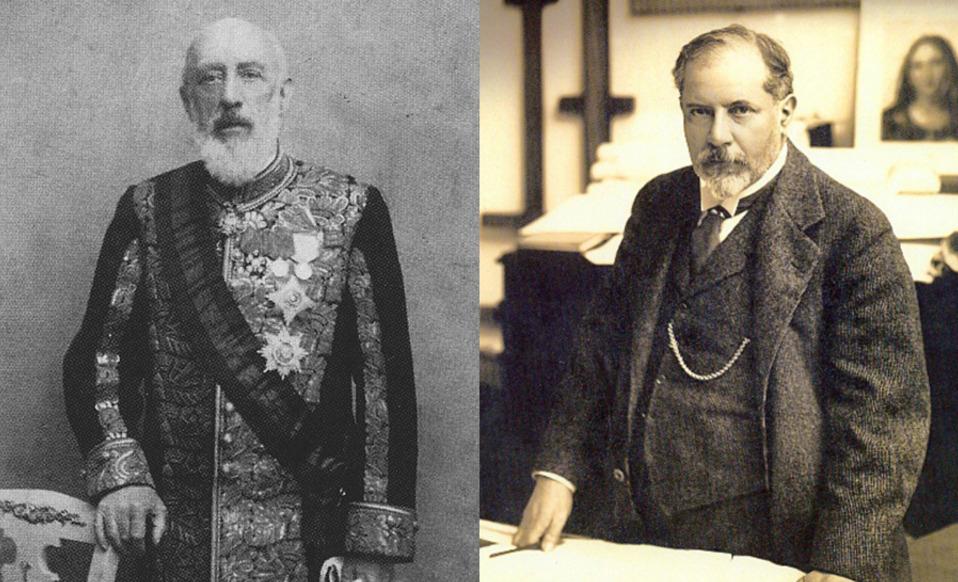 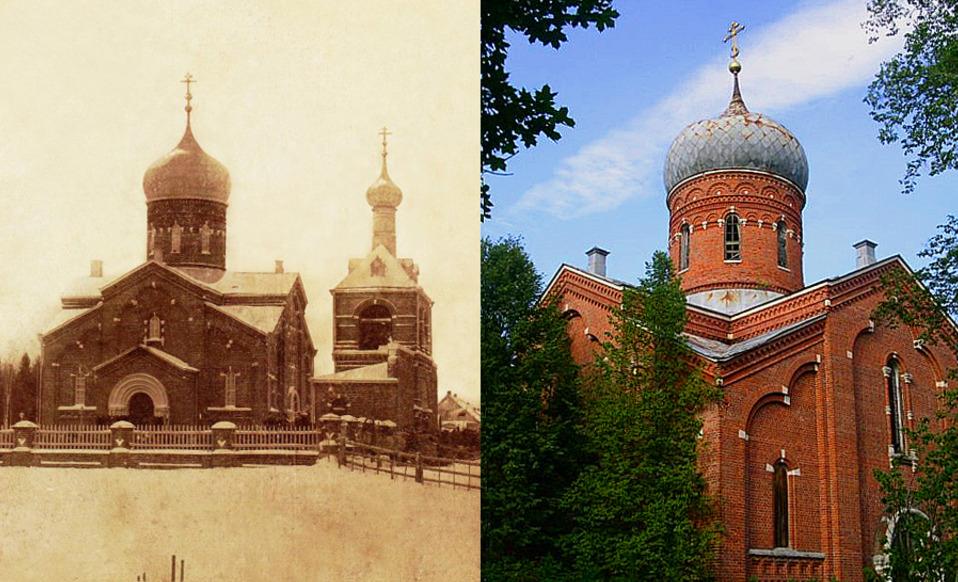 The Church of the Martyr Sophia in the wasteland of Novosyolka, Oleninsky District, is a stone one-altar church, consecrated in 1898. It is located in the forest, between the former villages of Novosyolki and Goncharovka, on the left bank of the river. Luchesy. The history of its creation is extremely interesting.

Built to last
From generation to generation, the inhabitants of the surrounding villages are passing on a legend (or a true story ?!) that they tried to pull the gilded crosses from the church with tractors back in the years of collectivization, but the cables broke, the engines stalled, the equipment broke, and the crosses remained in the same place. The German invaders also got used to them, tried to rip them off the church with the help of tanks - and again to no avail. So this miracle, created by the talent of Leonty Benois, stands in the wilderness.

Hope for Canada
According to the will of Yu.S., who died in 1913. Nechaev-Maltsov, half of his fortune, including the Novoselkovsky glass plant, passed to a distant relative - Count Pavel Nikolaevich Ignatiev, who soon became the last Minister of Public Education of the Russian Empire. The count, who had his own estate Artemyevo in the present Likhoslavl district of the Tver region, emigrated after the revolution to Europe and then to Canada, having managed to preserve his capital. His son George became a major diplomat, in the late 1960s he was the secretary of the UN Security Council, and his grandson Michael (Michael Grant Ignatieff), the head of the Liberal Party of Canada, is now the second person in this country as “the leader of Her Majesty's official opposition”.

Recently, the Rural Church Center, engaged in the conservation and restoration of old churches, drew attention to the St. Sophia Church. The director of the Center, Svetlana Aleksandrovna Melnikova, traveled with her colleagues to Novosyolki, they carried out small works on landscaping and cleaning the interior.

History reference
For many decades, both in the academic environment and among local historians, it was widely believed that at the end of the 19th century. the famous architect L.N. Benois completed the project of the Church of the Holy Martyr Sophia, built in 1898 in the village. Novoselki, on the territory of the modern Oleninsky district of the Tver region. This version had as many opponents as supporters. The most important thing was missing - documentary evidence. Benoit himself does not say anything about this fact in his surviving memories; a large number of family documents were destroyed in fear of reprisals. What were the reasons for the bold statements of the supporters of the version? In 1880, diplomat Yuri Stepanovich Nechaev (23.10.1834-1913), son of the Chief Prosecutor of the Holy Synod, inherited from his uncle Ivan Sergeevich Maltsov several factories and plants in various provinces of Russia, the largest of which was the Gusevsky Crystal Factory. Entering the rights of inheritance, Yu.S. Nechaev also adopted his uncle's surname and became Nechaev-Maltsov. In St. Petersburg, he lived on the current street. Tchaikovsky, and in 1883-1884. by his order Leonty Nikolaevich Benois made the interiors of the building in the Rococo style. The entrepreneur and the architect became friends. In the history of Russian culture, Yu.S. Nechaev-Maltsov entered as a person who donated to Russia the Museum of Fine Arts named after A.S. Pushkin in Moscow, donating more than two million rubles for its construction. A memorial plaque with its bas-relief is installed on the facade of the museum building.

Near the remote village of Novosyolki of the then Belsky district of the Smolensk province, at the very border with the Rzhevsky district of the Tver province (now the Oleninsky district of the Tver region), his uncle I.S. Maltsov founded a sand pit and, using raw materials imported from Rzhev and Staritsa, began to produce glass and earthenware: bottles, decorative glass caps and balls, buttons and walking sticks. In addition to glass, the factory also produced pottery. The plant employed more than 200 workers, among whom were Poles, French, Finns. The plant in Novosyolki continued to function at the request of the neighboring peasants even when it ceased to be profitable during the First World War.

In 1894, Yu.S. Nechaev-Maltsov, "the crystal king of Russia", decided to build a temple at the plant in the name of the holy Martyr Sophia, the heavenly patroness of his mother. Long-term searches of the St. Petersburg explorer Vladimir Welling, a descendant of the parishioners of this temple, have recently led to the long-awaited opening. In the funds of the Russian State Historical Archives, he found the following document: “On account of the Novoselsk Glass Factory. Issued to Professor Benois for the plan of the Novoselskaya Church - 1000 rubles. " The architect von Rentel, who lived in Rzhev, came to oversee the construction. The foundation stone of the church was solemnly carried out in May 1895 - with a prayer service at the beginning of work, with the participation of many guests, in the presence of four priests, senior police officers, sotsk and ten. During the construction of the temple, Yu.S. Nechaev-Maltsov, including at the opening of the church. The temple was consecrated in 1898 by N.N. Redkov wrote about him: “The temple is made of red bricks, with white stone decorations on the windows and deputy, arranged in the old Novgorod style and in appearance resembles a chapel with a large dome and one head. The stone belfry is arranged separately from the temple, above the gate to the fence. The church and the belfry are covered with galvanized iron. The inside of the temple is much larger than it seems in its appearance. The carved iconostasis, covered with oak plywood, with icons of artistic work, stretches across the entire width of the temple. There are three chapels in the church: two are consecrated in the name of St. Martyrs Sophia and St. the great martyr George, the third chapel in the name of the Protection of the Most Holy Theotokos was built under the sacristy. "

After the revolution, nonresident workers dispersed, and the Novosyolkovo glass plant stopped. In 1926, the Soviet authorities woke up and tried to restore production, but it was too late: the plant was slowly plundered, and it could not be restored. Novoselki gradually became depopulated. But, in full accordance with Russian unpredictability, the Sophia Church had a completely different fate. Her peers were dilapidated and disintegrated in the years of atheism, and to this day she stands almost as good as new, under whole domes and crosses. On an overgrown road, these places can now be reached only in very dry weather.

Most of all, when looking at the St. Sophia Church, the external freshness and intactness of the masonry, the strength and solidity of the structure are striking. The gilded cross crowning a massive solid dome is shining in the sun, only slightly bent by the efforts of numerous mechanized vandals. Yes, there are trees growing on the roof, but otherwise the church looks like a newly built one. Experts say that the secret lies in the special properties of local bricks and cement, the perfection of Benoit's project and the good conscience of the builders. Of course, vandals get here too. There were attempts to rip off the cross, recently a forged door to the temple was stolen, the Metlakh tiled tiles, which are lined with the floor, are being pulled apart.

Now the St. Sophia Church is a cultural monument of local importance, and the care of its safety lies with the district administration. Various options for its restoration and use are offered - from simple conservation to organizing a monastery or a skete here under the auspices of the Tver Metropolitanate. The process of complete reconstruction and restoration of the church is very expensive. The transfer of the St. Sophia Church to the monuments of federal significance would make it possible to apply for the allocation of funds from the Federal Target Program for the Preservation of Cultural Heritage Sites.

Leonty Nikolaevich Benois was born on August 23, 1856 in Peterhof, in 1875-1879. studied at the St. Petersburg Academy of Arts, six years later became an academician of architecture, and in 1893 - a full member of the St. Petersburg Academy of Arts. In 1903 he became the honorary chairman of the Society of Architects and Artists, was a professor at the Academy of Arts, rector of the Higher Art School under her. After the revolution, he remained in Russia, was a professor at the Free Art Workshops, and taught at the Institute of Civil Engineers. Shortly before his death, in 1927, he was awarded the title of Honored Artist of the RSFSR. L.N. Benoit died in Leningrad on February 8, 1928. His early architectural projects bear the influence of French classicism of the 17th-8th centuries. (Court singing chapel in St. Petersburg). Later he created buildings in the neo-Byzantine style (St. George's Cathedral in Gus-Khrustalny, the Russian chapel in Darmstadt, the Alexander Nevsky Cathedral in Warsaw). It was also close to Russian Art Nouveau, sometimes using the techniques of Romanesque architecture (the Church of Our Lady of Lourdes in St. Petersburg). In the mid-1900s. he passed from eclecticism to neoclassicism (the apartment building of the 1st Russian Insurance Society in St. Petersburg, the western building of the Russian Museum in St. Petersburg, which now bears his name). Historians of architecture note that for the work of L.N. Benois is characterized by clear composition, thoughtfulness of the artistic ensemble, elegance of forms. At the beginning of the XX century. he became one of the founders of the project for the transformation of St. Petersburg, participated in many reconstructions of the interiors and external appearance of buildings in the capital (the foyer of the Hermitage Theater, the White Meeting Room of the Mariinsky Palace), supervised the construction of the Grand Ducal Burial Vault in the Peter and Paul Fortress. Among the students of Leonty Nikolaevich Benois are such outstanding architects as Fyodor Lidval, Oskar Muntz, Vladimir Pokrovsky, Vladimir Gelfreikh, Lev Rudnev, Ivan Fomin, Vladimir Schuko, Alexey Shchusev, Marian Lialevich. His daughter Nadezhda, an artist and book graphic artist, is the mother of the famous British director and actor, winner of two Oscars, Emmy and Grammy, Commander of the Order of the British Empire Sir Peter Ustinov.

Transport accessibility
From the village. Olenino 26 km: 19 km on an asphalt road, 7 km on a dirt road and off-road. Through with. Novosyolki passed the famous Sheremetev highway - the road from Smolensk to the village. Young Tud and further, to the lake. Seliger and Veliky Novgorod.