Church of St. Michael the Archangel 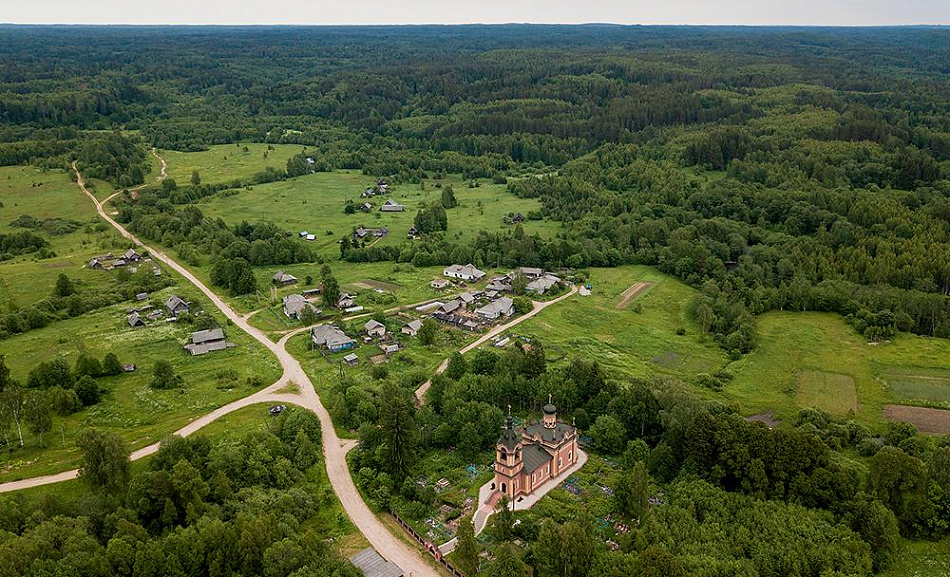 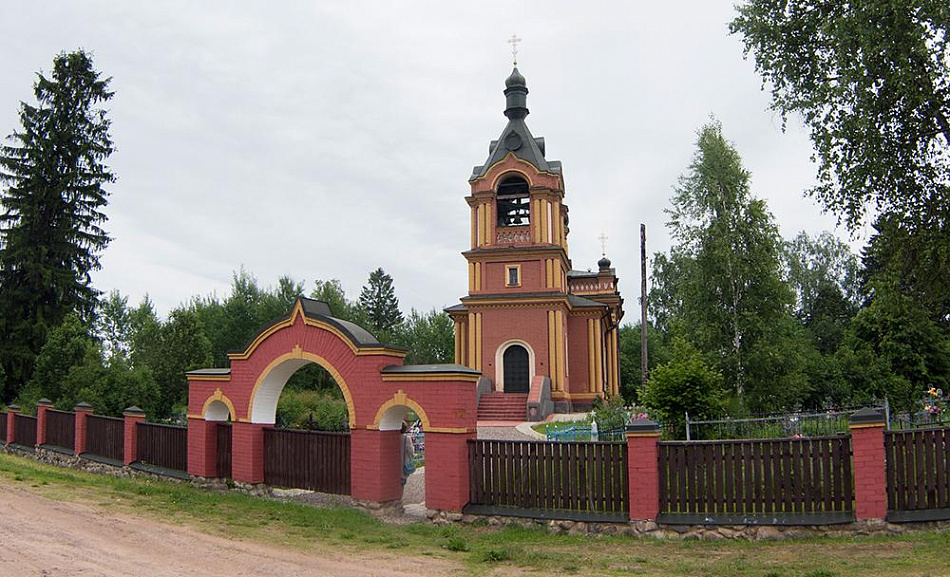 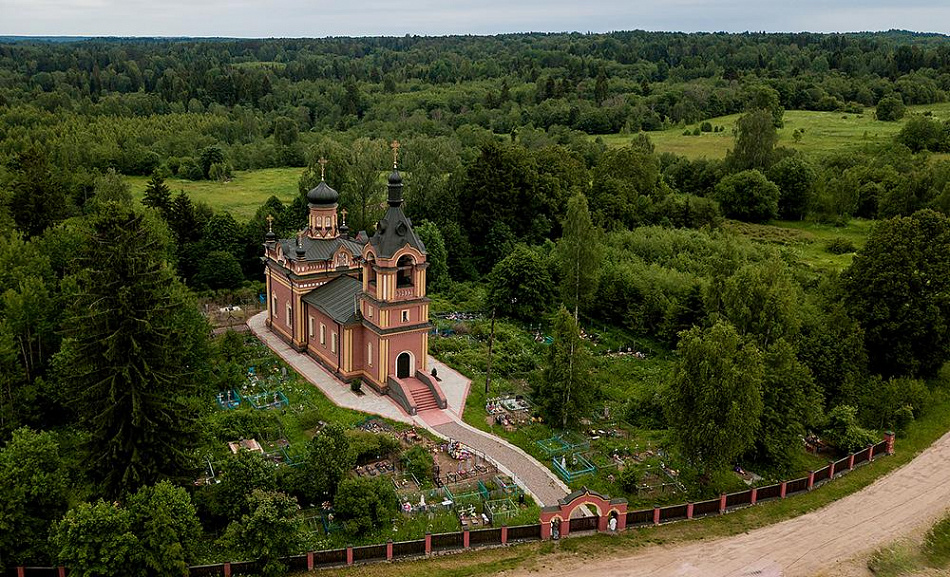 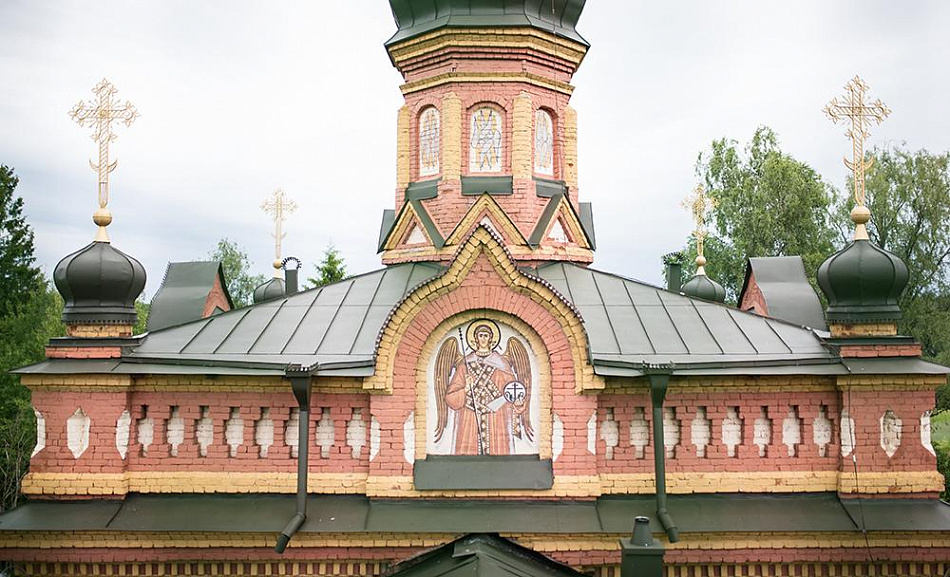 The Church of the Archangel Michael is located at the entrance to the village of Krasnoselie. In 1682 a church in the name of the Archangel Michael was already towered in Knyazhe Selo. It was built by the Toropchanin Sergey Skvortsov. His relative, the nobleman Mitrofan Skvortsov, in 1721 added a warm side-altar to the temple in the name of Nicholas the Wonderworker.

Mitrofan Grigorievich Skvortsov made the village of Knyazhe the center of his estate.

Based on the recording on the tombstone, Theodosia Lavrentievna Skvortsova was the wife of Yakov Alekseevich Kornilov. The Kornilov family later took care of the church. The clearing list of the Church of the Archangel Michael in the village of Knyazhye for 1914 is rich in historical facts. The temple was rebuilt in 1861 by the actual privy councilor Fyodor Petrovich Kornilov (1809 - 1895), he was single and did not leave posterity.
The building is a stone church, on a stone foundation. The bell tower is also made of stone in one connection with the church. There are two thrones in the church: the main one in the name of St. Michael the Archangel (consecrated in 1888), the second in the name of St. Sergius of Radonezh (consecrated in 1864). It is located 25 versts from the local dean in the Rovnoe churchyard.

A parish school was erected near the church. The Knyazheselskaya female one-class parish school was opened on October 2, 1902. Over the years, from 20 to 30 girls studied here.
The church was closed in May 1929. Twelve bells were shining. The most valuable icons were taken to Kholm, and the temple was locked. The building was not touched, it stood with crosses under an iron roof. They poured grain into it. The shrine also survived under the Germans, who looked into it in search of collective farm supplies.

On May 22, 1941, the ploskoshskaya newspaper "For Communism" reported in the article "Church for a Club". "Members of the collective farm" March 8 "of the Krasnoselsky village council at a general meeting unanimously decided to ask the executive committee of the district council to allow the premises of the former Krasnoselsky church to be used as a club."

In 1968, the architectural monument was examined by architects A.A. Galashevich and V.D. Filippov from the central scientific restoration workshop. Technician I. V. Zosimova noted.

“The church is built of bricks and plastered. The architectural forms of the building are designed in an electric pseudo-Russian style. The building has no architectural and artistic value. The main structures are in good condition. Used for grain storage. Icons and an iconostasis have been preserved. The iconostasis of the simultaneous construction of the church. Late icons. Literary information and archival materials were not found. "
This is how the architectural heritage of our ancestors remained unclaimed.

God's temple has bravely fought for the right to exist for over 50 years. However, he could not cope with perestroika. The public grain is gone. A short-term entry into the role of a club and a cinema failed. Then the castle disappeared, and excavations of black pathfinders appeared in the altar part, and the church itself became a den of young and old groups. They drank, smoked, drank, and in the end played out to the scarlet blaze of flame, in which the last faces of the saints perished. The floor was burnt out, partly the ceiling, the heads of the crosses were crooked.

Since 2000, the Church of the Archangel Michael has been active. Once, like many churches of Toropetsky district, abandoned, now it is decorated with new domes and bells. Restored it "with the whole world." The work was done very hard. There is still interior decoration to be done.

The image of St. Nicholas, carved to human height from solid wood, is striking. The work was done by Boris Toropets. The sculpture of the Monk Nile was previously carved by another master from Ploskie village.
A resident of Tver found ancient icons in her parents' house in the attic under a thick layer of sawdust and brought them as a gift to the church.

The rector in the church is Father Andrey (in the world Andrey Molotkov). This courageous and wise man, together with his wife and children, is restoring the village temple and conducting services there. He hopes to bring everything to the end, so that the beauty of this temple will fill the hearts of people with great spiritual joy for many years to come.

SOUTH. Popov. Flatness. Boncharovo. Knyazhye Selo ... Travels of a local historian in the settlements of the Ploskoshsky rural administrative district of the Tver region. - Toropets, 2004.