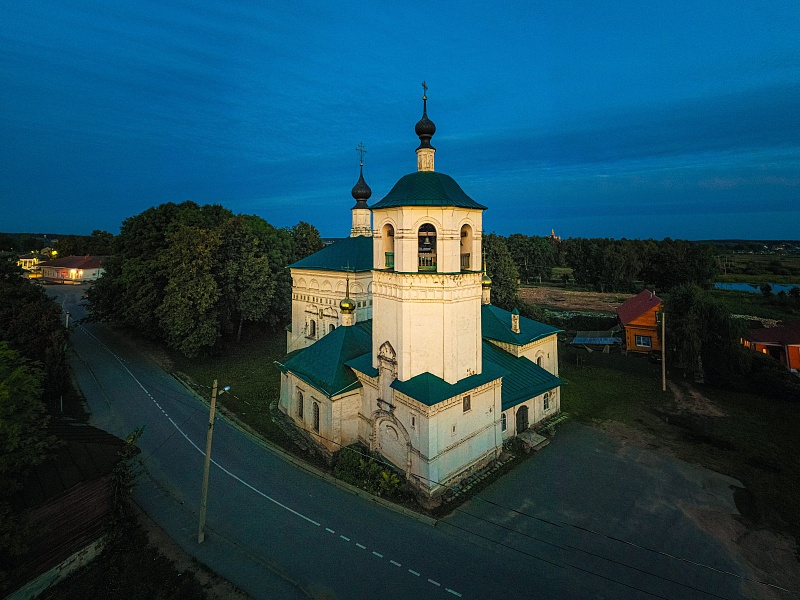 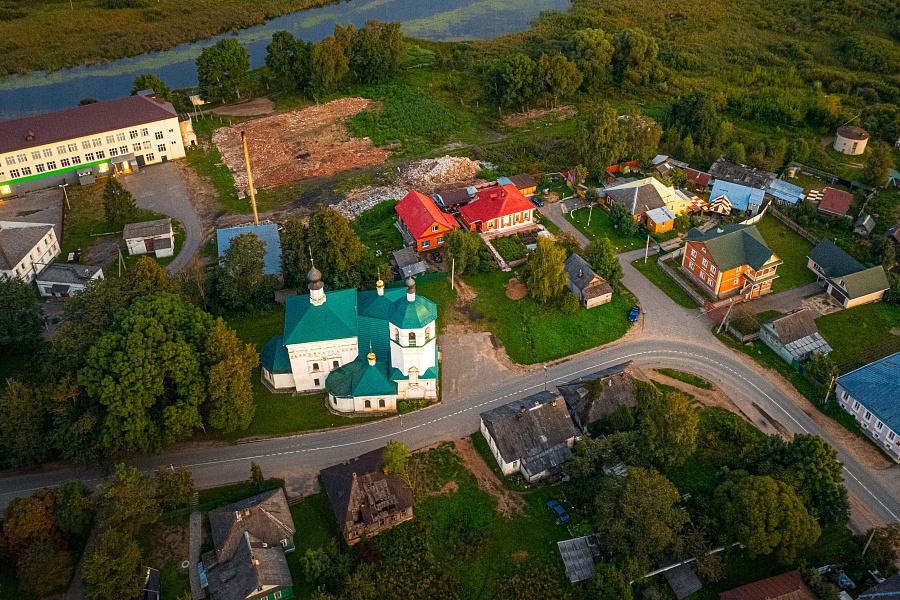 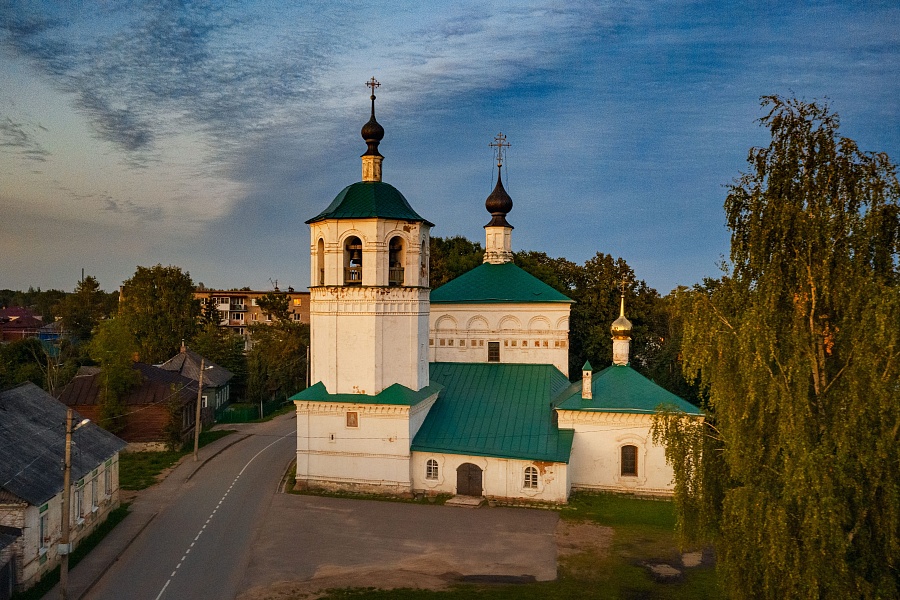 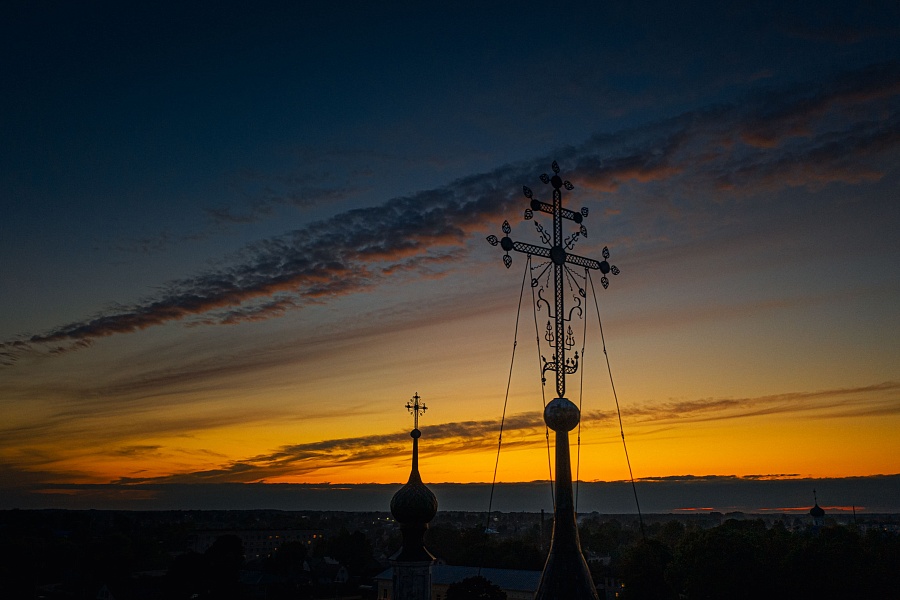 Church of the Transfiguration of the Savior in Toropets, brick, three-altar, built between 1680 and 1720, belongs to the type of one-apse pillarless temples.

Tikhon's childhood
The locally revered icon of the All-Merciful Savior was kept in the church.

Rector of the Church of the Transfiguration of the Savior in the second half of the 19th century. It was. John Bellavin, father of the Patriarch of Moscow and All Russia, St. Tikhon. Opposite the church, on the other side of the street. Nikitin, the house in which Patriarch Tikhon spent his childhood is located, as a boy he served his father in the Church of the Transfiguration of the Savior. A memorial plaque was installed on the house in 1997, and a museum is currently open in the house.

History reference
In architectural terms, this is a complex consisting of a quadrangle of the main volume of the temple, covered with a closed vault, as well as a refectory with a separate volume of the south side-altar under an eight-domed dome and an octagonal bell tower. Wall treatment is distinguished by corner decorative kokoshniks, distributed on two planes of the building, green tiles with the image of a two-headed eagle, consisting of several components, and solid blades at the corners. The high bell tower, standing in an elongated octagon on a quadrangle, is decorated with a belt of figured bricks under the ringing arches, has an arched portal decorated with brick cutting. The temple twice, in 1738 and 1758, was significantly damaged by fires, which led to a change in the original appearance, in particular, numerous extensions appeared. In Soviet times, the church was closed, weddings were broken. In the early 2000s. the temple was returned to the believers, it is being restored. The bells have returned to the belfry, services are being held in the church.

Patriarch Tikhon (in the world Vasily Ivanovich Belavin) was born on January 31, 1865 in the village. Klin Toropetsky district in the family of a priest. After graduating from the course of the Toropetsky Theological School, he entered the Pskov Theological Seminary, and upon graduation, the St. Petersburg Theological Academy, which he graduated from in 1888. Since 1894, he is the rector of the Kazan Theological Academy, and three years later - the bishop, first of Lublin, and then the Aleutian and North American. During this period of his life, spanning almost a decade, he streamlined the life of Orthodox parishes in the United States, erected new churches, including the Cathedral of St. Nicholas the Wonderworker in New York, where he transferred the chair of the American Diocese from San Francisco, organized the Minneapolis Spiritual seminary for future pastors, parish schools and orphanages for children. Bishop Tikhon took an active part in the translation of liturgical books into English. In Canada, at his request, a vicar department was opened. In 1905 Bishop Tikhon was elevated to the rank of archbishop. In the United States, the glory of a true apostle of Orthodoxy was fixed to him.

On August 28, 1917, on the feast of the Dormition of the Most Holy Theotokos, the All-Russian Local Council opened, which restored the Patriarchate. After four rounds of voting, the Council elected the bishop of Kharkov Anthony (Khrapovitsky), Archbishop Arseny (Stadnitsky) of Novgorod, and Metropolitan Tikhon of Moscow - "the cleverest, strictest and kindest" as candidates for the Primate See. The lot fell on Metropolitan Tikhon. The enthronement of the new Patriarch took place in the Kremlin Assumption Cathedral on December 4, on the day of the celebration of the Entry into the Church of the Most Holy Theotokos.

In his first address to the All-Russian flock, Patriarch Tikhon characterized the era the country was going through as "the year of God's wrath." When famine struck in the summer of 1921, Patriarch Tikhon organized a Committee for Aid to the Famine and issued an appeal for aid to the starving, addressed to Orthodox Russia and to all peoples.

In a document dated January 7, 1925, known as the testament of His Holiness Patriarch Tikhon, he wrote: “During the years of civil devastation, by the will of God, without which nothing happens in the world, Soviet power became the head of the Russian state. Without sinning against our faith and the Church, not allowing any compromises and concessions in the field of faith, in a civil relation we must be sincere in relation to Soviet power and work for the common good, conforming the routine of external church life and activities with the new state system ... At the same time, we express our confidence that the establishment of clean, sincere relations will induce our authorities to treat us with full confidence. " His Holiness Patriarch Tikhon died on April 7, 1925, on the feast of the Annunciation of the Most Holy Theotokos, and was buried in the Moscow Donskoy Monastery.

In 1981, the Council of Bishops of the Russian Orthodox Church Outside of Russia glorified in the council the new martyrs and confessors of the Russian Church, Patriarch Tikhon. And in 1989, in the year of the 500th anniversary of the establishment of the Patriarchate in Russia, His Holiness Patriarch Tikhon was glorified by the Russian Orthodox Church of the Moscow Patriarchate. His memory is held on April 7 and October 9. Since 1997, St. Tikhon's international Orthodox conferences have been held in Toropets, the homeland of St. Tikhon.

How to get there
The church is located in the historical center of Toropets, where most of the objects of historical-cultural heritage.