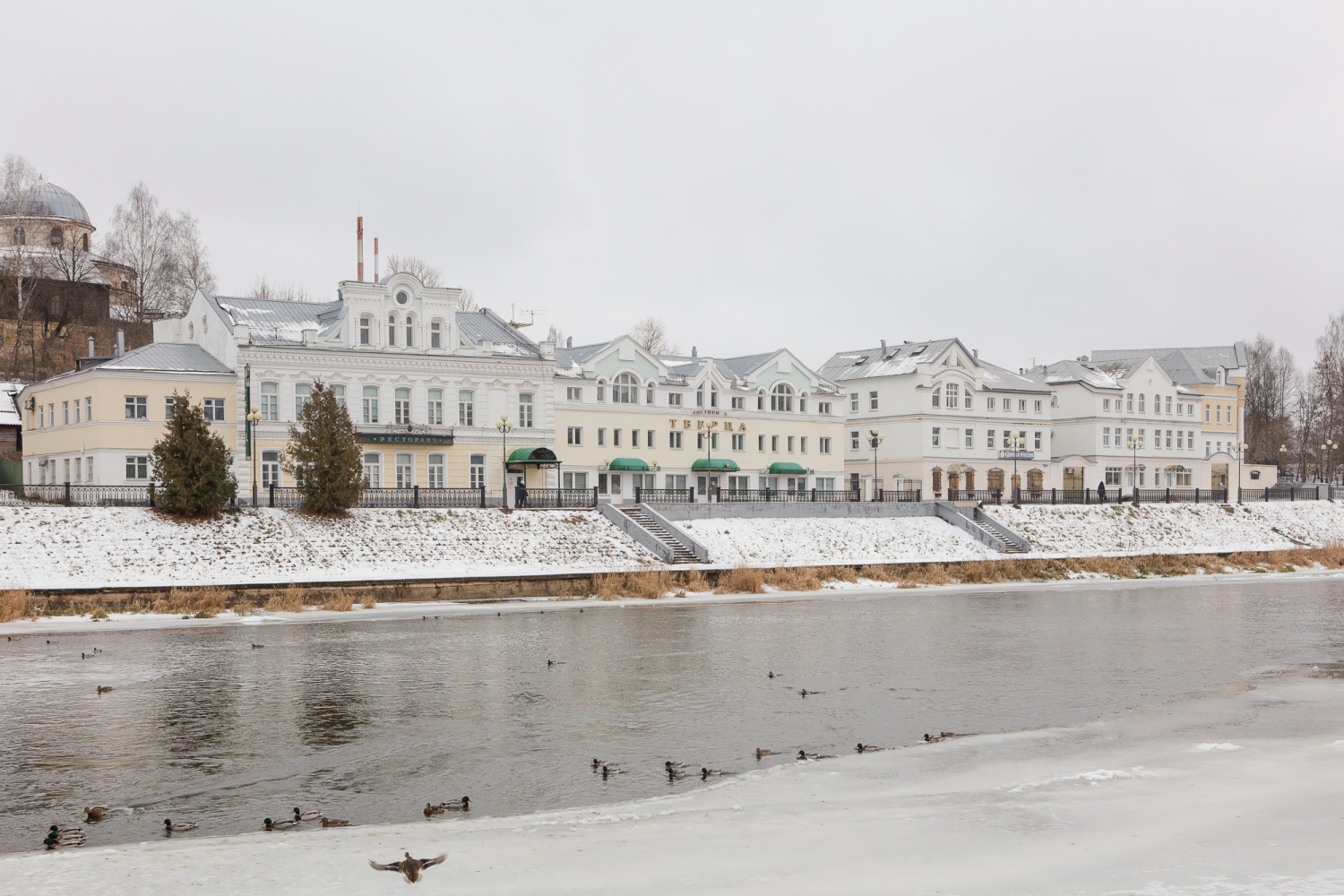 Sightseeing tour of the city with a tour of the historic center. Situated between two capitals, Tver harmoniously combines both the originality of Moscow and the European look of St. Petersburg. You will get acquainted with the famous three-beam city planning system - the "Versailles trident", the Imperial Travel Palace, monuments to Afanasy Nikitin - a merchant and traveler of the 15th century, I.A. Krylov, A.S. Pushkin, Mikhail Tversky; the most beautiful embankment of Stepan Razin, beautiful squares, as if strung on the main street of the city and, of course, with one of the symbols of Tver - the Old Volzhsky lace bridge.

12.00 Excursion to the Tver Imperial Palace (regional art gallery) - an outstanding monument of architecture and history of the 18th - 19th centuries.

Continuation of the sightseeing tour.

18.00 Dinner at the hotel restaurant

18.40 Departure for the excursion

19.00 - 21.00 Excursion to the Afanasy brewery (acquaintance with production workshops, tasting of several sorts of beer and other products).

Breakfast in the hotel

09.30 Sightseeing tour of Staritsa - "we love the town" of Ivan the Terrible.

Many architectural monuments have been preserved here since the "pre-Pushkin" times - fragments of the fortifications of the Staritsky Kremlin, white-stone smithies, the Holy Dormition Monastery of the 16th century, the Staritskaya Post Station (1783), the Pushkin Rotunda (a drinking establishment of the early 19th century. , where Pushkin spent time), the house of the merchant Filippov - the center of local cultural life). The architectural ensembles of the city are a stone poem that can be admired endlessly.

11.00 Departure to the village of Bernovo - the center of the "Pushkin Ring"

12.00 Excursion around the A.S. Pushkin Museum and the Wolf Manor Park

The museum is located in the manor house of the noble Wulf family. The exposition presents the objective world of the Pushkin era, portraits of the owners of old manors and addressees of Pushkin's lyrics. Adjacent to the Wolf's house is a park with the preserved structure of an old park from the 18th century with elements of French regular and English romantic parks.

15.00 Lunch at a cafe with Pozharsky cutlets (Torzhok gastronomic brand)

Unique road museum! You will find yourself in the same kibitka with the great Russian poet, leave St. Petersburg, drive along the main road of the country, stopping at 25 postal stations and listening to amazing stories and, finally, find yourself in Moscow on Pushkin Square!

This wonderful city was visited by V.A. Zhukovsky, A.S. Pushkin, P.A. Vyazemsky, S.A. Sobolevsky, V.G. Belinsky ... Torzhok's charm lies in the picturesque landscape, in the harmony of its architectural appearance. Torzhok is valuable as a unique monument of urban architecture. You will see a beautiful panorama of the city on the hills, the Traveling Palace of Catherine II, the Transfiguration Cathedral, the Borisoglebsk Monastery, the wooden Ascension Church of the 17th century, Pushkin Square, architectural masterpieces by N. Lvov, bridges over the river. Tvertsa.

08.30 Departure for an excursion to Likhoslavl

10.00 The city of Likhoslavl - the center of the Karelian settlement of the Tver region

Interactive excursion to the Karelian National Museum of Local Lore.

During the excursion we will get acquainted with the history and structure of the life of the Tver Karelians.

Then the Karelian girls will delight us with their amazing songs, playing national musical instruments and perky dances.

12.30 Excursion to the museum of the factory "Marmalade Fairy Tale", acquaintance with the production of natural marmalade, tea drinking with tasting, visiting a company store

16.00 Excursion to the interactive "Museum of the Goat", where guests will learn why the inhabitants of Tver are called Tver goats and what facts and legends are associated with this animal in our city.

Travel agency "Nika" reserves the right to change the order of excursions while maintaining the total volume or replacing excursion objects or an object placement on the same price and value. The company is not responsible for changes in the program related to traffic situations.

Туристическая фирма "Ника"
More information about the guide
Fill in the fields below
by Clicking the" submit for moderation "button, I consent to the processing of personal data in accordance with the conditions specified here.
Up